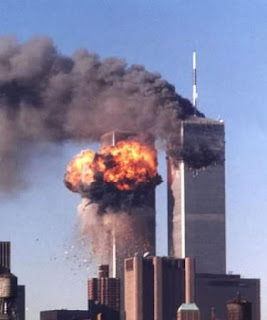 Most people that believe the Official Story put forth concerning the events of 911, don't realize that it is, by the very definition of the words itself, a Conspiracy Theory.
A theory that a number of Muslims (known terrorists) conspired to secretly risk coming to America, to secretly study at American schools to learn how to fly, while risking exposure the entire time and then hijacking, not one, but four airliners to attack the USA, without prompting any kind of response by the US Air-force during the entire highjacking, and complete this exceedingly difficult, if not impossible mission without a hitch.
Yet, I have more problems believing the Conspiracy Theory put forth by the Government, because of all the lies they told as the Official Story then I do believing the theories that the Government itself was involved, considering all the lies they told.
For Example:
1. George Bush lied about how and when he first received the information.
2. Bush & Co. lied about expecting any kind of attack like this, meanwhile the Airforce was unable to respond to this threat because at the exact moment it was occurring, they were all off playing war-games running the exact same scenarios, far enough away to prevent them from even accidentally intercepting.
3. Not one United States hating terrorist groups claimed responsibility, but rather blame was laid at the feet of Osama Bin Laden(a CIA trained operative) and even though he was blamed for the attacks and is from Saudia Arabia, it was Iraq that was attacked under the false premise that Saddam Hussain(who was himself put in power by the CIA after they assassinated the previous leader) had Weapons of Mass Destruction.
4. All of the legislation that had previously failed to pass because the American people considered it an Invasion of Privacy, was re-bundled into the Patriot Act, striping Americans of the very rights their constitution is supposed to provide and they had themselves just rejected.

These are just a few of the lies that make the OFFICIAL CONSPIRACY THEORY false and lead me to think those who are lying are doing so because they are hiding their own involvement and ulterior motives for this so-called surprise attack.