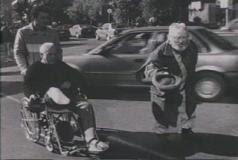 Another year has passed and the situations facing homeless people on the streets of Victoria remain horrific. 109 people died while living homeless on the streets of Victoria in 2007, this statistic is based on the number of funeral services held at ‘Our Place’ which is the primary drop-in center in downtown Victoria. On average, 2 homeless people died every week in Victoria in 2007, up slightly from 106 deaths in 2006.
In February 2007 the ‘Homeless Needs Survey’ counted 1242 people as homeless or unstably housed and at risk of becoming homeless.
In December the ‘Mayor’s Task Force on Breaking the Cycle of Mental Illness, Addiction and Homelessness’ announced that 1550 people were considered to be homeless on the streets of Victoria. These two research projects cost taxpayers approximately $500,000 and used up thousands of volunteer hours. The conclusions are documented in two massive documents that simply state that homeless people need homes. They call for action but to date none has been forthcoming from any level of government.
In October the Victoria Steering Committee on Homelessness launched a website to help inform the public about ways to help the homeless through action: www.ourwayhome.ca In October the Vancouver Island Health Authority attempted to close Laurel House, a drop in center for people living with mental illness, but faced fierce opposition from members, a house occupation, and outrage from the general public. Closure was suspended for six months. Many of these people are on the brink of street life. VIHA cut down 30 endangered Arbutus trees in order to prevent homeless people sleeping under them, and were fined by the City of Victoria for destroying the endangered trees. The Needle Exchange, run with funding from VIHA, was evicted from its downtown location.
The City of Victoria and the Attorney General of British Columbia have worked hard throughout the year to keep a constitutional issue from being heard by a BC Supreme Court Judge. The question is whether the public has the right to sleep outside on publicly owned land when there is no other place to sleep due to a lack of affordable housing or emergency shelter. The point being that jailing people for sleeping when there is no other place to sleep is against the human rights and freedoms as defined by the Canadian Constitution. The City of Victoria has not responded to a Judge who wants a firm definition of the word 'abode' in the context of its use in a city bylaw which prohibits sleeping outdoors, or for that matter sitting, standing, lying, and squatting on public space.
The mayor has ordered police to post signs stating “No Loitering, Camping, Soliciting, or Trespassing” at stores all over the downtown core. Legally, these signs take the onus off the property owner or store manager to formerly launch a complaint and allow police to act on their own to remove people from private property. Using the ‘chattel’ bylaw Mayor Allan Lowe and the Council of Victoria have mandated that the City Police force take backpacks away from street people. Any belongs that are set down on sidewalks or streets are confiscated and a fine must be paid to reclaim the item. Hundreds of homeless people have had backpacks, blankets, foam, tarps, and other items taken away.
In April, with a great deal of media spin, Premier Gordon Campbell announced that the province of BC spent $80 million towards low income housing, protecting 996 affordable housing units by buying 15 buildings in Vancouver, Victoria and Burnaby. However, these units were all occupies and no new housing was made available for homeless people. $250 million has been set aside to building affordable housing but no housing construction has begun and the money has not seen the light of day.
In May Premier Gordon Campbell increased his own salary by 54% with an increase of $89,000 on top of what he already makes. All MLA’s increase their wage by %29 although the minority NDP, unable to stop the bill from passing, donated their wage increase to charity. Victoria’s apartment vacancy rate is 0.5%, one of the lowest in Canada. The minimum rent for a bachelor suite is $500 per month, if you can find it and more likely around $650. 2 bedroom apartments are a minimum of $1000. Welfare in British Columbia is one of the lowest in the country at $235 for support of a single person with $375 maximum for shelter. The highest rate of income assistance is for a 2 parent family with children at $401.06 support and a maximum rent of $820.
British Columbia has the highest poverty rate in Canada.
Posted by ancient clown at 11:33 pm 3 comments: