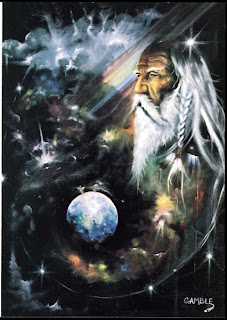 There are those who know the price of everything,
but do not understand the value. 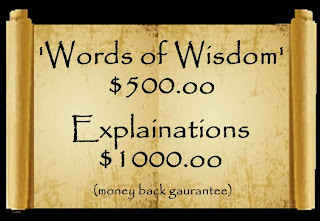 There are those who understand the Value of Nothing
and think it is priceless. There are those who will read the words and think they know what is says;
but still do not understand what it means.
Posted by ancient clown at 2:18 pm No comments:

Synopsis- God enters and takes Center Throne. Christ enters and takes the Throne seated to the right and the Son of Man enters and takes the Throne seated to the left. All Souls in time line up, carrying their Hearts for their moment before the Judge.
God passes the Son of Man the Scales of Justice and places the heart of each soul upon them as the Son of Man reads them, as he was taught to do by the Holy Spirit on his earthly journey.
If there were any who had walked with Christ and they were struck down before they could complete their Journey. Jesus would stand in their defense and they would be freed, having the Mark of GOD upon their heads. While others would claim themselves to be believers as well, Jesus remained seated and did not know them, since they still bore the Mark of Cain upon theirs.
When they tried to plead before the Son of Man, that they did not know or had been mislead, the Son of Man looked back upon them and simply said; "All were told...You chose not to Listen and Share, thereby misleading yourself and others."
As the Son of Man finished separating the goats from the sheep, a new day dawned. While the sheep that had passed through the door continued their journey with all they had acquired spiritually, the goat's remained locked outside and thrown into the Lake of Fire where every neuron is slowly burned away, until every last semblance of consciousness has been removed, before the Lake of Fire pours back into the River of Life and refills the Well of Souls.
With the dawning of that new day, comes also the Dawning of the New Age, having evolved one step higher and wiping the records clean.
Blessed are those that have an ear, listen and share, that we may yet recognize the 'Sign of Jonah' and share the Destiny of the Ninivites and not earn the Fate of Babylon.
Posted by ancient clown at 11:56 pm No comments: